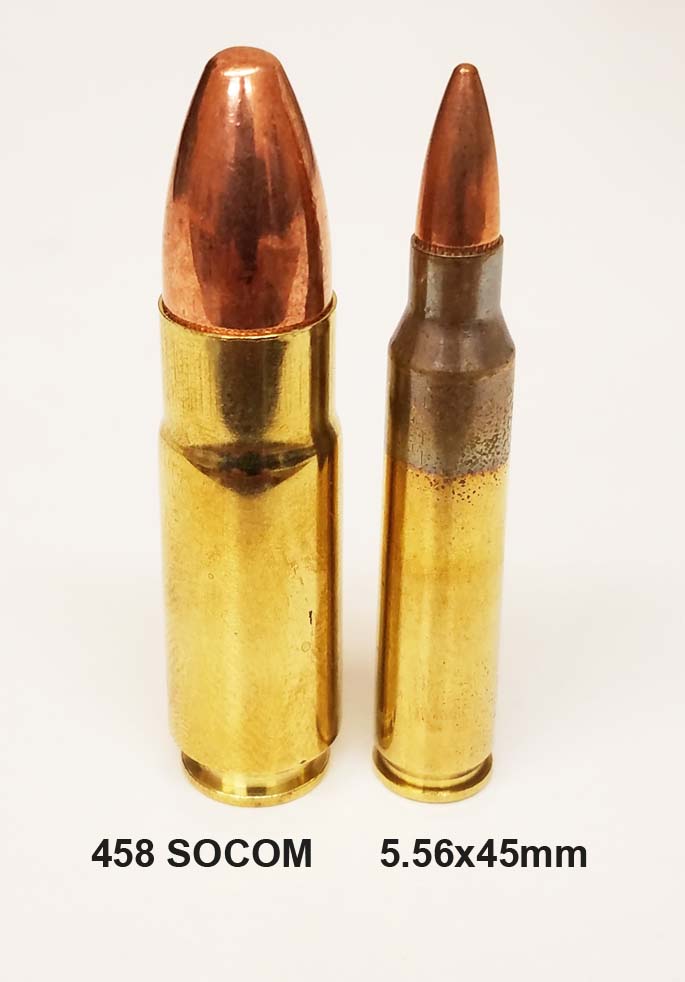 Most have heard the story of how the 458 SOCOM cartridge came to be or some variation of it, but here are some of the details...

The .458 SOCOM (aka: 11.5x40mm RB) cartridge was developed by Teppo Jutsu as a result of an informal discussion with a senior member of the US Special Operations community following the Task Force Ranger debacle in Mogadishu, Somalia, as described in the book “Blackhawk Down”.  In the book, several members of TF Ranger comment on the apparent ineffectiveness of the 5.56mm ammunition in their engagement of the assailants, stating that often multiple shots were required to disable a target.  The aforementioned discussion focused on the possibility of developing a new cartridge capable of providing superior stopping power for AR-15/M-16 based weapon systems.

To make a long story short, the .458 SOCOM was born, with a 40 mm long case to allow the use of a variety of .458 Dia bullets and still function through the AR magazine, a rim rebated to 0.473” to allow easy retrofit to existing bolt actions AND leave more material on the AR bolt.   On top of that, by the fact that the case is a pistol case, it operates at relatively low pressure, and thus imparts less stress on parts of the rifle. The case length of 40 mm, ensures that the cartridge was still short enough to function through the AR magazine. The .458 SOCOM uses standard AR-15 magazines with no modification. The case diameter is 13.6 mm, so 20-round magazines will hold seven rounds, the 30-round magazines will hold 10 rounds and the 40-round 5.56 mm magazines will hold 15 rounds.


Through the design and research process in developing the 458 SOCOM, the early obvious candidate was the 7.62 x 39 M43 cartridge that originated in the former Soviet Bloc.  As the AR-15/M-16 has already been adapted to fire this cartridge, this seemed a simple solution.  To increase the flexibility of the new cartridge, however, the decision was made to increase the bullet diameter to be able to employ heavier projectiles.  This, too, has already been explored by the Soviets in the 9 x 39 “Grom” variant of the M43 cartridge.  Teppo Jutsu explored the idea of modifying the 6mm PPC case to accept the 9mm bullet, but dismissed this design as it felt it offered too much potential for disaster by accidentally chambering either a standard 7.62 x 39 round or 6mm PPC round in a rifle chambered in “9mm PPC”.

To avoid this issue, Teppo Jutsu designed a separate cartridge, dubbed the .358 CQB, to offer similar performance as the 9x39.  This cartridge was designed to accept the standard .357 caliber JHP bullets, as well as the heavy (200-250 gr.) .358 caliber hunting bullets, the latter for subsonic suppressed applications.  By choosing the 35 caliber, existing 9mm suppressors can be used without modification, and standard 7.62x39 magazines will accept the cartridge. – But that’s a whole other story …The 338 Spectre was also developed.

The name of the cartridge was chosen based on the caliber (obviously) and based on the fact that the initial impetus came from those “Beer and BBQ” discussions with Teppo Jutsu friend's in special operations.  In addition, the fact that the round was also inspired by the Barnes .458 x 1.5” which had seen action in Vietnam in a Special Operations role played a part in naming the cartridge.

Rifles in this caliber have seen action in Iraq and Afghanistan and have reportedly proved very effective, especially against vehicles.

Early, Teppo Jutsu obtained the help of SBR (Southern Ballistic Research) to develope improved and wider variety of ammunition for the 458 SOCOM. SBR continues ammuntion and ballistic research to help take the cartridge to the next step as a fully developed CQB weapons platform. SBR is the leading manufacturer of the 458 SOCOM factory ammunition.

Where is Teppo Jutsu and Marty ter Weeme?

Marty has accepted an extended overseas assignment and Teppo Jutsu have formed a strategic alliance and partnership with Southern Ballistic Research, LLC (SBR).  We communicate with Marty often to discuss different topics involving the SOCOM and SPECTRE family of cartridges.  SBR will service all Teppo Jutsu custom firearms builds and uppers, and continue our dedication to provide support to the 458 SOCOM community.

Every SHOT SHOW (January), Marty makes a return CONUS visit and you can usually find him at our booth.  If you have the opportunity to attend the SHOT SHOW, please stop by our booth in the Law Enforcement section at booth # 7403