A Complete Guide to the .458 SOCOM Pistol 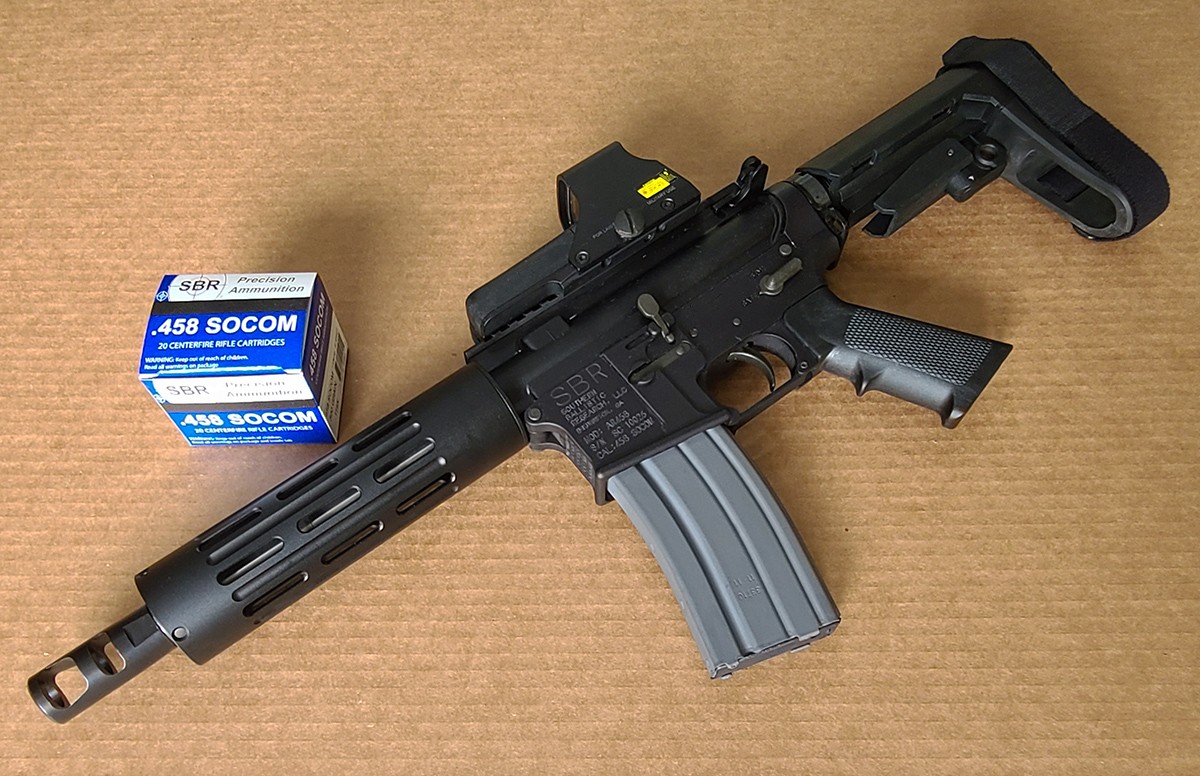 One of the more exciting calibers to emerge in recent years for the AR platform has been the 458 SOCOM. This is a large round that performs surprisingly well in a shorter barrel for pistol or short-barreled rifle configurations in a subsonic load for hunting purposes as well as personal defense.

Although limited by range, out to 150 yards there are many different loads available from supersonic 300-grain spitzer bullets to heavy 550-grain loads that travel at subsonic velocity. These heavy bullets are especially useful when running a suppressed firearm.

The 458 SOCOM round was designed at the request of US Special Operations Command as a response to reported lackluster performance of 5.56 NATO from Army Rangers and Special Forces serving in Somalia during Operation Gothic Serpent, made famous by the book and movie: Black Hawk Down.

Marty ter Weeme of Teppo Jutsu debuted the cartridge in 2000 and the first 458 SOCOM rifles came out in 2001. At the time, it was considered a huge development for the AR platform, giving the shooter the power of a 45-70 rifle load in an AR-15 format.

The base for the 458 SOCOM cartridge was a lengthened 50 AE case (50 Action Express) that measured 40mm in overall case length. The size of the rim was reduced so the round could also be chambered in a bolt-action rifle. These dimensions allowed the big round to fit through the barrel extension of a typical M4 carbine.

A standard upper receiver for an AR is rated for pressure as high as 65,000 psi. All 458 SOCOM rounds use slightly more than half of this pressure at around 35,000 psi. Bolt thrust limitations are why the 458 SOCOM operates at 35,000 psi.

The first factory ammo was built to spec by SBR Ammunition, who is still the main supplier of 458 SOCOM ammunition, components, and parts to this day.

Reloading for the 458 SOCOM is surprisingly easy. It is a bottleneck cartridge case using a large pistol primer. Winchester 296 or Hodgdon H110 are the more popular powders and most off-the-shelf .458” bullets can be used. Heavier bullets are available from SBR Ammunition for subsonic loads.

When most people think of a firearm chambered in this caliber the first thought is often a 458 SOCOM rifle with a barrel length in excess of 16”. There is certainly nothing wrong with that and initially, 458 SOCOM was mostly available in a standard AR-15 rifle configuration with a 16 or 20-inch barrel.

However, the pistol or SBR (short barreled rifle) route has become popular with a lot of SOCOM shooters in recent years for a number of reasons. The most common being portability when used in conjunction with a suppressor. Shooters who primarily use the 458 SOCOM at a bench on the range may not care if there are an extra 8 or more inches on the end of their 16” or 20” barreled rifle, but a hunter who is covering a lot of ground on the search for feral hogs, black bear or deer, or a shooter intending to use 458 SOCOM for self-defense might object to the extra length or weight imparted by a rifle with a longer barrel as opposed to a 10” barreled firearm with a pistol brace or a dedicated SBR with an attached silencer.

Advantages and Disadvantages of Each

In a rifle, the 458 SOCOM performs extremely well. The 300-grain bullet in this supersonic load has an average velocity at the muzzle of about 1900 fps. And delivers 2405 foot-pounds of energy. Going beyond the 16-inch barrel length provides few, if any, benefits. Think of the 458 SOCOM as an oversized pistol caliber round that uses a large pistol primer. You will see no significant increase in muzzle velocity at 18, 20, or even 24-inches.

A rifle-length SOCOM build will allow for the use of a buttstock, which will aid in keeping felt recoil under control. The same cannot be said for using certain types of braces on the buffer tube. Some braces will impart the feeling of being kicked in the shoulder by a mule.

A pistol build on the other hand provides a practical and economical use of the ammo without sacrificing muzzle velocity, energy or accuracy and is particularly useful if you plan on attaching a suppressor of some sort. This is most important for hunters and shooters using a suppressed gun for self-defense as the shorter barrel, with or without a suppressor, becomes much easier to maneuver, not to mention lighter in weight.

An SBR seems to offer the best of both worlds with a more compact overall length and a stable stock. If you don’t already have a lower receiver registered as an SBR, this can be a long, onerous process taking up to a year for the tax stamp to come back.

Each option has a few advantages and disadvantages, but shorter seems to be better, so let’s look at the process of building a pistol or SBR in 458 SOCOM.

Building a 458 SOCOM pistol can be as simple or as elaborate as you prefer. A dedicated complete 458 SOCOM upper receiver including the bolt carrier group can be sourced and installed on your existing lower receiver or you can build it completely from scratch using a stripped upper receiver and a 458 SOCOM barrel to make an AR pistol. One important note on a non-458 SOCOM upper receiver, such as a standard AR-15 upper intended for 5.56 NATO, is that you will need an enlarged ejection port. This can be done by most competent gunsmiths and only requires cutting about 0.025” of material from an existing ejection port.

As for a barrel, regardless of the length, the best twist rate seems to be 1:14”. This may seem different for most AR shooters where the latest twist rate is about half that, but you have to consider that you are essentially shooting large pistol bullets with a thick density as opposed to a skinnier and much lighter rifle spitzer bullet.

For suppressed shooting, an enhanced charging handle may be recommended to decrease excessive gas flow through the rear of the upper receiver, but it is not absolutely necessary.

The 458 SOCOM was designed to use as many of the parts found on an off-the-shelf AR-15 as possible. Many builders like to add an adjustable gas block, but the truth is that an adjustable gas block is only needed for shooting full-power supersonic ammo through a suppressor. It is not necessary for shooting subsonic ammo suppressed or subsonic or supersonic ammunition unsuppressed. It may be something to keep in mind if you are building a rifle with a sub-16” barrel and are pinning and welding the suppressor to make up the barrel length to go without the SBR tax stamp.

A carbine length buffer tube with a standard buffer is all that is needed because the round was designed with this in mind, particularly if it was to be fielded as a replacement for the M4 carbine’s 5.56 caliber without having to completely replace existing military stocks of spare parts. For that matter, an SBR build with a full-length rifle buffer works equally as well. There really is little to no need for shooters to invest in heavy buffer weights and springs for their 458 SOCOM builds.

Barrel length may be a consideration, but luckily the majority of the round’s powder is burned up at less than 10” due to the large size of the bullet. If you are going the suppressed route but don’t want the headache of the NFA tax stamp process for an SBR, the suppressor can be pinned and welded to the barrel to bring the barrel length above 16-inches, as stated previously. This allows you to use a dedicated rifle stock instead of a pistol brace mounted to the buffer tube. There is still an NFA tax stamp for the suppressor but being permanently attached to the short barrel may eliminate the need for an SBR stamp. Always check current NFA regulations, as they change often.

While building everything on your own may seem rewarding and give a sense of accomplishment, be wary of barrels and bolts from certain manufacturers. Many low-cost alternatives are not built to the original specs as they are reverse engineered, and some low-end manufacturers tend to cut costs where they can at the expense of your safety.

Lastly, 458 SOCOM magazines need to be sourced or modified from existing AR-15 magazines. Capacity is cut by more than half due to the large circumference of the round. Modifying metal GI magazines by reforming the feed lips works best. While polymer magazines have come a long way in the past 30 years, most are not suitable for use with 458 SOCOM and will cause feed issues. If you don’t feel confident modifying existing magazines there are quality factory magazines available.

Whether you are looking for a complete 458 SOCOM upper receiver, a bolt head made in spec for your carrier, or a suitable muzzle device; SBR Ammunition can cater to the needs of your build.